Costs are 70% less than in the Western Europe and USA.

WE ARE WAITING FOR YOU IN THE REPUBLIC OF MOLDOVA! 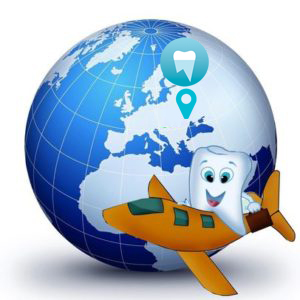 1. Why choose the Republic of Moldova for dental treatment?

Here are the facts.

We have combined two different areas – DENTISTRY and PROFESSIONAL TRAVEL SERVICE – in one product in order to provide you with very individual, friendly and attentive service.

Chisinau (the capital of the Republic of Moldova) is very easy to get to! Direct flights to Chisinau are available from many airports in the Western Europe and US.

The senior dental specialists have over 10 years of continuous experience.

The dental laboratory and clinic are based in the same location, which means there are no delays between the dentist and technician.

All appointments are booked and confirmed before you will get to Iceberg DENT Dental Clinic, so there are no longer waiting times for a dental visit!

We don’t just organise your dental treatment. We want you to get the most from your visit to the Republic of Moldova, so we offer tailor-made tour packages for every individual client.

The Iceberg DENT clinic is located in the Chisinau city, not far from Chisinau International Airport, 30 minutes to drive.
Our dental clinic provides highly qualified and guaranteed dentistry. The clinic offers you low prices and gives official guarantees for its therapeutic and medical work.  The laboratory and clinic have modern equipment and use only advanced materials imported from the UK, Germany, Switzerland and the USA. The Senior dental specialists have over 10 years of continuous experience. The dental office and laboratory are based in the same location, which means there are no delays between the dentist and technician and no waiting lists to visit a dentist.

Fill in a simple application form https://www.icebergdent.md/en/contact/.
For any initial questions you can contact us at reception@icebergdent.md or call us on +373-688-388-33 .

Along with your Professional Dental Consultation, you will be provided with the final cost of your dental treatment and its duration. Please let us know in advance the date of your arrival! We will get back to you shortly with a calculation of accommodation and transfer costs. In addition, we will offer the best price for round-trip flights and help you organise the tickets.

Upon your arrival at Chisinau International Airport (Republic of Moldova), our travel manager will meet you holding a card with your name, and drive you straight to your apartment. Your personal 24/7 assistant will provide you with a mobile phone with a local sim-card (free of charge). You can always stay in touch with family or business colleagues using our special low-cost tariffs. On the day of your appointment, you will be escorted to the clinic and start your dental procedure.

DEAR GUESTS!
We are pleased to offer you the following type of accommodation.   (more info about)

The standard rates for transfers are:

WE ARE WAITING FOR YOU IN THE REPUBLIC OF MOLDOVA!

Although it has a small area, the Republic of Moldova as a tourist destination has a great potential represented first of all by the geomorphologic aspect of its territory – an unusual diversity of landscape reservations or scenery and unique geological monuments of European and world value. Over the last decade the priority forms of tourism in the Republic of Moldova have been: rural, wine, cultural tourism, health and beauty tourism.

Moldova is a small country in Eastern Europe. Its rich soil and temperate continental climate with warm summers and mild winters have made the country one of the most productive agricultural regions since ancient times, and a major supplier of agricultural products in southeastern Europe. Moldova’s fertile soil produces fruits, vegetables and grain products and one of the most important industries of the country is wine – making, for which Moldova is known far beyond its borders. For many years, wine-making in Moldova was the basic occupation of the population.

The Republic of Moldova has a rich cultural heritage which may be of great interest to tourists. 140 cultural heritage sites may be included in the tourist circuit. The earliest visible remains of the built heritage are Geto-Dacian sites and Roman fortifications. The remains of medieval fortresses, archaeological complexes such as Orheiul Vechi, cave monasteries, nobles’ mansions and peasant houses offer a diversity of visitor attractions. Chisinau, the capital city, features a good number of cultural heritage monuments, fine examples of domestic architecture from the 19th and 20th centuries, which might be considered as tourist attractions as well.

The Republic of Moldova has 87 museums with rich collections of art. Additionally, museums are mostly housed in buildings of a special architectural importance. All of these have their specialist audiences, but at least 20 are of interest to the general public.

Part of the national tourist product is the variety of cultures represented in different parts of the country. The Republic of Moldova is an amalgam of many nationalities and cultures with many traditions, languages, folklore, cooking, etc. There are over 880 folk music groups in the Republic of Moldova, most of them reflecting the distinct traditions of their districts and ethnic origins. It is worth mentioning the national craftsmanship both because of cultural value and also because it supplies souvenirs for tourists.

First our dental radiologist takes a digital 3D CT Scan of your teeth.

We will discuss your primary issues and your wishes concerning your teeth.

This is followed by a professional examination of the teeth and gums.

We devise a complete treatment plan for restoring your healthy smile.

Fill out the form and we will contact you during our working hours. Urgent dental care will be provided usually the same day.

Your partner for absolute dental health.